The H.L. Hunley submarine made history during the American Civil War when she became the first submarine to sink an enemy ship in combat. In February 1864, the Hunley, under command of Lieutenant George E. Dixon, sank the U.S.S. Housatonic; a Union blockade vessel. The Hunley's mission was a success, but disappeared under mysterious circumstances, and never returned to port. The Hunley was the third in a series of submarines constructed by engineers Horace Lawson Hunley, Baxter Watson, and James McClintock. Before the Hunley's successful attack on the Housatonic, the Hunley had two accidents, the second of which claimed Horace Hunley's life.

(2) Use your phone's browser to go to the VR link at H.L. Hunley Museum. 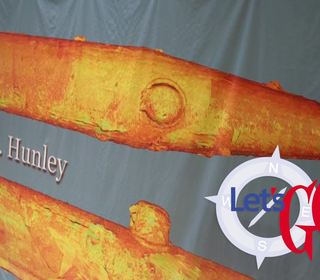 E. American Civil War (1861-1865)
Please note by logging out from KnowItAll you will be automatically logged out from LearningWhy