One of the most numerous animals in the salt marsh is the fiddler crab. In the movie above, hundreds of crabs are feeding along a creek bank at low tide after emerging from their burrows. Fiddler crabs eat mud. They use their mouthparts to swish around mud and water, and to separate the organic material (food) from the inorganic material (sand). They swallow the food, and spit the sand back out in a little ball. The male fiddler crabs have one large claw and one small claw for feeding, but the females have two small claws for feeding and no large claw. Fiddler crabs live in burrows in the salt marsh. They are air-breathers and will die if submerged in water. However, they need access to water in order to wet their gills so they can breathe. 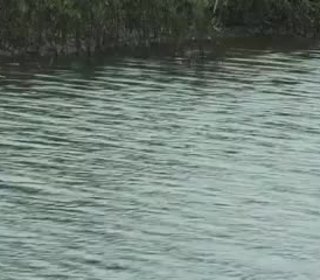 Fiddler Crabs Emerging from Their Burrows | The Salt Marsh
Video 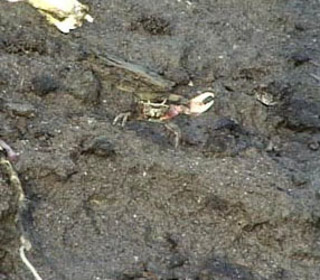