Elbert Brown of Pendleton crafted split-oak baskets for over eighty years. He carried on a tradition that has been in his South Carolina upcountry family since the mid-nineteenth century. Brown learned to make baskets from his father and his uncle, both of whom were skilled basketmakers. Early in this century, Mr. Brown learned to make large split-oak hampers for the farmers of the Piedmont region. Later in his life, he learned to make fish trap baskets.

Depending on type, split-oak baskets can require special designs and construction details. As a skilled basketmaker, Brown always spent significant time selecting the white oak splits and shaving and smoothing each split before it is woven. He also spent many hours teaching basketmaking to others, enabling the continuity of his traditional construction style. Brown received the Jean Laney Harris Folk Heritage Award in 1988.

NOTE: A video transcript is available for the video below. 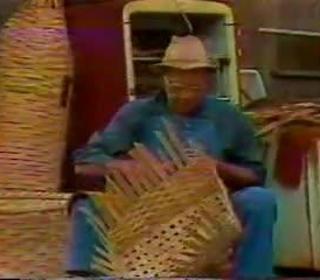